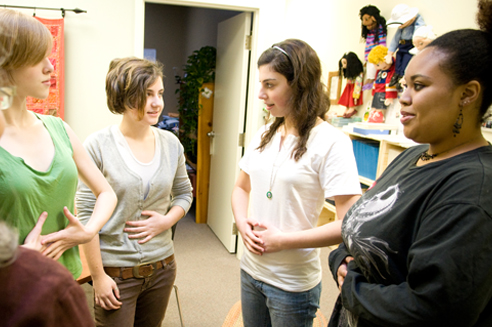 COPA’s ongoing commitment to building “safe, strong and free” school and community environments is widely recognized. COPA is a unique organization that provides a range of services to Francophone and other communities in Ontario, such as consultation, training and support in areas related to child and youth assault prevention.

COPA’s wide range of inspiring, innovative yet practical educational programs and numerous multimedia resources are designed to reach out to all members of the school community.

The foundation of COPA’s unique approach is the notion of empowerment as well as a coherent analysis based on the principles of equity and inclusion aimed at social change. COPA strives for the recognition of human rights, particularly those of children, teens and other vulnerable groups in our society (for example, women, and people whose sexual orientation, gender identity or ethnocultural origins are marginalized).

COPA is the recipient of a number of awards, among them the Greer Award presented by the Ontario Teachers’ Federation, and the Public Education Advocacy Award presented by the Canadian Teachers’ Federation. These two awards were given to COPA in recognition of its significant contributions to the quality of publicly funded education. COPA is also the recipient of the Prix Clé de Voûte, awarded by FESFO (Fédération de la jeunesse franco-ontarienne) for its contribution to positive social change fostering continued progress and improvement of young girls’ and women’s social conditions.

COPA collaborates with several local and provincial agencies, such as the Ontario Teachers’ Federation (OTF) and AEFO (Association des enseignantes et enseignants franco-ontariens). With the support of OTF, AEFO and of the Ontario Ministry of Education, COPA has been able to create, update and expand the original version of Safe@School.


COPA offers a variety of assault prevention education programs in schools in Ontario. Together, these programs form a coherent whole, meeting the needs of specific groups of people who are vulnerable to assault in our society. All COPA’s programming fosters the empowerment of children and youth (as well as other vulnerable groups) and their communities. To date, COPA’s provincial facilitation team along with its provincial network of local community partners have offered programming to over 100,000 students in Ontario.


COPA works in partnership with local community groups to ensure the implementation of its programs around the province. These francophone agencies have access to COPA’s training, as well as to meetings, resources and provincial conferences organized and offered by COPA.


COPA creates and produces an array of educational resources designed for all members of the school community. These resources are available in various websites created and managed by COPA (including the following English-language components: infocopa.com/copa-in-english, safeatschool.ca, changeourworld.ca).


COPA collaborates with a number of local francophone organizations and institutions around Ontario, such as women’s groups, cultural and community organizations, school boards or community health centres. These groups constitute COPA’s provincial network, offering our assault prevention education programming in French Language schools in their communities.

You can reach COPA by email at copa@rogers.com or by telephone at 416-466-7490. You can also visit our website at infocopa.com/copa-in-english.